Nothing embodies school pride than healthy interschool sports competition. That’s why the Barbados Association of Principals of Public Secondary Schools (BAPPSS) stages one of the biggest events on the national sports calendar. The Barbados Secondary School Athletic Championships (BSSAC) is held annually during the month of March and showcases the best in junior amateur athletics the country has to offer.
BSSAC has become the biggest and the most popular amateur athletics competition in Barbados, consisting of athletes aged 11 to 19. But it’s more than that, it’s six days of a general excitement broken down in to 2 zonal meets comprising of the Frank Blackman and Ester Maynard Zones respectively.
It not unusual to see based on the quality of competition and performance of the emerging stars of the BSSAC track meet qualifying for The CARIFTA Games which is an annual athletics competition founded by the Caribbean Free Trade Association (CARIFTA). 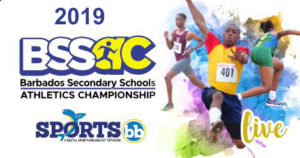